"I was introduced to Amy Pancake by my massage therapist. As a 56 year old retired business man, I had never done any yoga or movement therapy before. For the last, almost, a decade Amy has helped me work through both physical and emotional issues though yoga and Continuum movement. I was reluctant at first, especially with the movement therapy, but over time, I really began to appreciate what it was doing for me. I was sleeping better and generally felt more energized.
Amy is one of the most refreshing people in both body and spirit that I have ever met. I could set a watch to her promptness. She was always upbeat and encouraging. If I could identify an issue I was have she could either solve it then or come back the next week with a solution. She would also stay in touch with my personal trainer to coordinate the best path for my overall physical well being.
Amy has a truly unique skill set and I endorse her practice 100%." 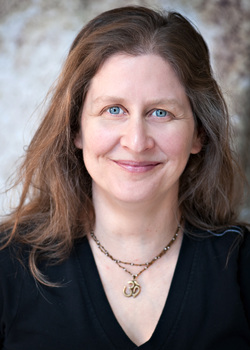 Amy Pancake, M.A., RSME/RSMT was introduced to yoga while learning Vipassana meditation at Wat Suan Mokkh Buddhist monastery in Thailand (1992). She has taught well over 10,000 yoga classes since completing the Sivananda Yoga Teacher certification (2002). She completed advanced yoga teacher training with Ana Forrest (2006), and studied Continuum Movement with Emilie Conrad (2006-2014).  Amy studied Applied Kinesiology at The University of Texas (Austin) to broaden her study of movement. She enjoys teaching several different styles of yoga, including Hatha, kids yoga and restorative. She is an authorized Wellsprings Practitioner in Continuum Movement (2017), a member of the Continuum Teachers Association (2019) and a Registered Somatic Movement Educator/Therapist (ISMETA).
In 2015 she co-founded Chakra Kids Yoga & Chakra Kids Yoga Teacher Training. She is the owner and main facilitator of Chakra Kids Yoga, LLC.
​www.chakrakidsyoga.com for more information, events, and training opportunities.

Amy's classes are designed to awaken and enliven every cell of the body so that fresh energy can flow and old fears and blockages may be released. We do this by using breath awareness, internal alignment, creating space in the joints and moving from the core. Learn how to balance the dichotomies of stillness and movement, support and surrender, grace and structural integrity. Get rid of stiffness, old movement patterns, and tightness!
Check out Amy's Blog on Kids Yoga: www.KulaHalfPints.BlogSpot.com
Photo credit: Monica Paredes